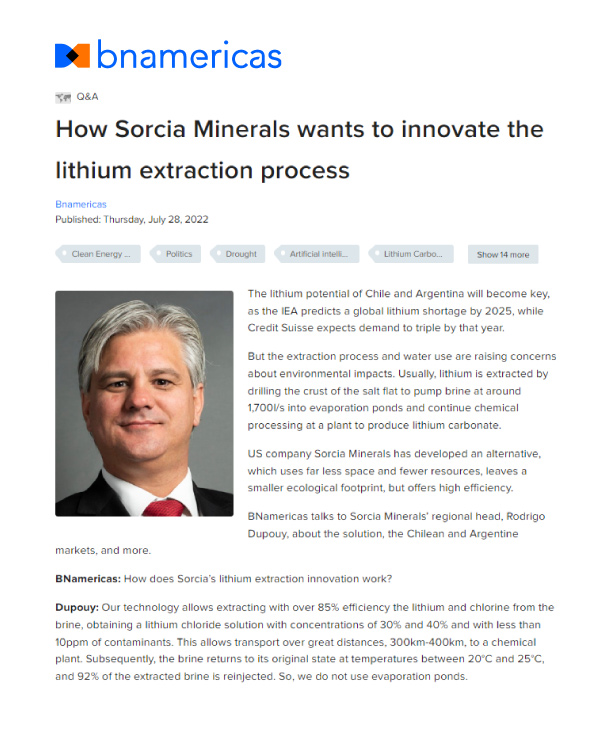 The lithium potential of Chile and Argentina will become key, as the IEA predicts a global lithium shortage by 2025, while Credit Suisse expects demand to triple by that year.

But the extraction process and water use are raising concerns about environmental impacts. Usually, lithium is extracted by drilling the crust of the salt flat to pump brine at around 1,700l/s into evaporation ponds and continue chemical processing at a plant to produce lithium carbonate.

BNamericas talks to Sorcia Minerals’ regional head, Rodrigo Dupouy, about the solution, the Chilean and Argentine markets, and more.

Dupouy: Our technology allows extracting with over 85% efficiency the lithium and chlorine from the brine, obtaining a lithium chloride solution with concentrations of 30% and 40% and with less than 10ppm of contaminants. This allows transport over great distances, 300km-400km, to a chemical plant. Subsequently, the brine returns to its original state at temperatures between 20°C and 25°C, and 92% of the extracted brine is reinjected. So, we do not use evaporation ponds.

In Chile, SQM said it reinjects, but it is probably just some currents that are left over and are thrown into the salt flat so they fall by gravity. But practically everything evaporates there too. In Argentina nothing is reinjected. Neither in Bolivia. Our proposal is sustainable and more efficient than current technologies. We can produce the same amount but with a lower rate of extraction. If we have an extraction rate of 100l/s, we will reinject 92l/s.

Dupouy: They are mobile and modular plants that are not very invasive. A 20l/s plant with all its support materials, that is, with LNG, electric generators, camps, roads for trucks, among others, requires 0.7ha. Quite little compared to the evaporation ponds in the Atacama salt flat [operated by SQM and Albemarle] that cover 52km2. To produce what Chile currently offers, we would only need 40ha.

Dupouy: Two small mobile and modular plants of 20l/s, which allow quick and easy installation. It took nine people 10 days to assemble a plant. The two towers can be coupled until reaching the desired flow rate and concentration. If you want to extract 40l/s, for example, more plants will be needed. If you want less quantity, it would be fewer plants.

BNamericas: How many base plants are needed?

The mobility of the plants allows them to be installed on the salt flat, as is done in most operations, but they could also be installed 10km away, considering the extraction and reinjection pipes necessary in the same salt flat.

Salt flats are protected areas, which makes intensive exploitation more difficult, especially due to the impact ponds have on ecosystems, flora and fauna. To avoid this, the inventor John Burba discovered the solution in 1986 and between 1994 and 1998 he developed the first plant for direct lithium extraction through selective absorption with small plants. Finally, in 1998, the first plant was installed in the Hombre Muerto salt flat in Argentina, which still works and is operated by Livent, achieving very good results.

In March, we completed the first plant as Sorcia Minerals in Louisiana, which is in the testing phase. Though not connected to a salt flat, it is receiving 70,000l of brine to feed the plant and carry out tests.

Each salt flat is different and requires studies to know where to extract and where to reinject. Reinjection generally occurs 2km from the extraction point. The central idea is that the brine has the same volume it had before extraction.

BNamericas: How many staff are required to operate the plants?

Dupouy: The 20l/s plant requires six to eight people. The plant contains an automated system that allows it to be monitored from one place, from Santiago or Houston.

BNamericas: What is the business model and investment required to acquire a project in the Maricunga salt flat, for example, with production of 20,000t/y of lithium carbonate equivalent?

Dupouy: We don’t sell or lease the plant, we operate it. We participate in our own projects or joint ventures, operating our plants. In this case, we would be talking about US$250mn to US$300mn a year for the installation of the plant, without considering the modular chemical plant, which depends on many factors. The cost is very low compared to the US$700mn for a plant with evaporation ponds that also require more time to implement.

Dupouy: The 20l/s plant uses less than 0.2l/s of water, which is very little and translates into one tanker truck every three or four days. But desalinated water is also one of our business objectives, since we do not want to use the same water that is found in the salt flats and we want to avoid the constant entry and exit of trucks.

BNamericas: At what stage are Sorcia Minerals’ lithium projects in Chile?

Dupouy: We have two projects in Chile, in the Maricunga salt flat in Atacama region and in the Tara salt flat in Antofagasta region. Both are under exploration. We want to start drilling soon, but without state authorization, we cannot exploit lithium.

Chile’s problem is that lithium is seen as a strategic material and can only be exploited through special operating contracts, which are hardly granted to private parties. We have spoken with state agencies, with the government and with universities to implement our plants in Chile and start the development of a more sustainable lithium industry.

BNamericas: How is the lithium project in Argentina’s Antofalla salt flat progressing?

Dupouy: It’s going very well, but we’ve had logistical problems, since the country doesn’t have mining development similar to Chile’s. We are starting a drilling campaign that considers about 3,500m in the first phase and that we intend to finish in four or five months. The first well will close soon and the results are already being analyzed to determine the quality of the salt flat. Based on the results, we will decide on a second exploration phase.

BNamericas: What’s your view on Chile’s planned national lithium company and the greater role the state wants to play in the lithium segment?

Dupouy: For years we have wanted to reach a public-private agreement with the state, whether through [state companies] Enami, Codelco, [development agency] Corfo or another. Our only concern is that a reasonable participation is guaranteed for each actor, because the costs involved in our technology are high and we need to be sure of the investments.

Dupouy: The demand for lithium will grow a lot. There is talk of global demand of 1.2Mt/y of lithium carbonate equivalent, but I think that figure is falling short. Global production is around 400,000t/y currently. In other words, we are far from reaching the goal. Another problem is time, since it takes years for the industry to reach 100% operational capacity. In contrast, our technology is quick to install and implement and allows for much faster production.

BNamericas: How long would production take using your plants?

BNamericas: What’s your view on the debate about Chile’s mining royalty, which includes higher rates for lithium and possibly higher production costs?

Dupouy: It will indeed increase costs. We are concerned about the royalty discussion because it does not consider the possibility of deducting start-up and operational costs. We miners spend a lot of money establishing the resources, so if they are not tax deductible, production costs will rise.

Finance minister Mario Marcel said he is open to discuss the royalty, so there is the possibility of further debate. We are not against the royalty, but it should not be disproportionate [and hinder] incorporating technologies and developing projects.

BNamericas: Does the lithium production you plan for Chile and Argentina involve added value?

Dupouy: Our goal is the production of lithium hydroxide. In the future, we could go into lithium carbonate or make cathodes. Through our Sorcia Motors branch, we have just acquired British car company TVR and we are analyzing the possibility of converting them to electric cars in Europe by 2024. We want to install a line in Chile to supply the local and regional market.

I think it’s difficult to open lithium battery factories in Chile, but intermediate products such as lithium cathodes or lithium hydroxide are already great advances in added value.

BNamericas: Do you have plans for other countries?

Dupouy: Our technology only works with brine. In Brazil and Peru, [lithium] is extracted from rocks. Chile was the biggest lithium producer four or five years ago. Today we are number two, almost third place and with the possibility of falling to fourth place. That is why it is important to incorporate this type of technology to regain first place and get better benefits from the boom that lithium is experiencing.